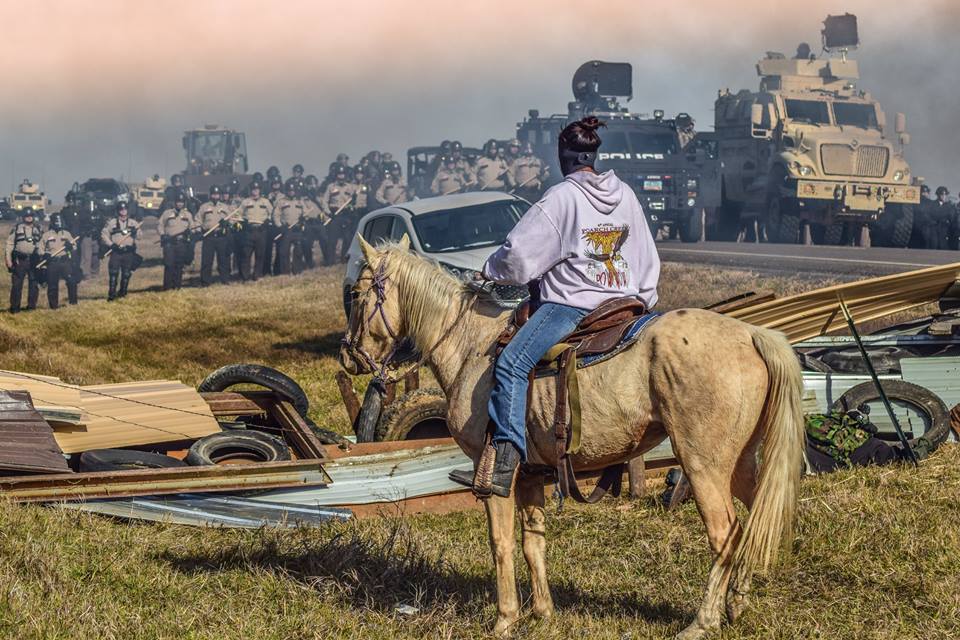 Correcting the Narrative: A Conversation about Challenging Media Representations of Native Americans

Since the first European explorers landed on their land, Native Americans have faced intentional and systemic violence, resulting in a genocide of liv

Since the first European explorers landed on their land, Native Americans have faced intentional and systemic violence, resulting in a genocide of lives, land, and culture. Driven onto reservations, forced into boarding schools, and pushed to assimilate to Euro-American ways of life, attempts at erasure intensified in the nineteenth-century. Today, these attempts live on through attacks on land rights and sacred sites (#NoDAPL), attempts at political disenfranchisement, and utter erasure or misrepresentation in media and entertainment.

As journalist Taté Walker explained to us, representation is so lacking that November, which is Native American Heritage Month, “seems to be the only month we matter to the masses.”

Signifier Spotlight talked to three Native American creatives who are actively working to challenge the limited, stereotypical representations of indigenous people in the media, in order to create space and opportunities for more dynamic, diverse representation.

Tristan Ahtone (@Tahtone) : an award-winning journalist & member of Oklahoma’s Kiowa Tribe. Tristan has reported for publications like The Newshour with Jim Lehrer, National Native News, Vice & NPR. He serves as Vice President for the Native American Journalists Association. Head to his website for his pieces that show a more comprehensive, challenging look at Native American life & the stereotypes they battle.

What was one of biggest factors that motivated or enabled your career? Can you talk about some of the barriers you had to overcome to get to where you are?

Moya-Smith: Frustration. Anger. Curiosity. Resistance. Those were my biggest factors that motivated me to become a journalist. They still inspire my work today. I’m frustrated by the inaccurate language reporters and editors use with reference to Native Americans. Photo editors still run captions that state Native Americans wear “costumes.” Reporters still print the word “chant” whenever a Native American sings. Anger: I pitch stories, imperative stories, powerful stories, that are continually rejected. Curiosity: Why? Why are Native Americans so often cancelled out of the American conversation? Resistance: I got into journalism not to change the narrative, but to correct it.

“I got into journalism not to change the narrative, but to correct it.”

Ahtone: I got my start in journalism when I attended the Institute of American Indian Arts for a degree in visual arts. I was required to take an elective writing course so I chose the Journalism 101 course with Evelina Lucero. She was incredibly supportive and invested in my education and pushed me to reach my full potential. As my time at IAIA continued I learned two things: I was a terrible painter and I loved journalism, so I decided to switch majors. One of the biggest barriers I faced (and I know many others face and will continue to face) was getting my education paid for – the Columbia School of Journalism isn’t cheap. But the biggest obstacle was convincing editors that stories on Indigenous communities were valuable. If a story didn’t follow the traditional gloom and doom tropes, editors often seemed perplexed and tended to take pitches with hesitation. It’s not as difficult these days – partly because I’m better at pitching stories now – but also because news organizations are beginning to take Indigenous Affairs much more seriously. However, they still love doom and gloom stories: pieces that feature what reporter Duncan McCue calls the “WD4 Rule” – it’s not news unless the Indians are warriors, drumming, dancing, drunk or dying. This obviously isn’t an issue if you’re writing for an Indigenous outlet, but at the moment, I’m most interested in writing for non-Native organizations – places where I’m challenged to write stories for people who wouldn’t normally see any sort of coverage about Indigenous people.

Tall Paul: I was motivated to become a Hip Hop artist because I always admired it as an art form. I enabled myself to become a Hip Hop artist after making some healthy lifestyle changes that freed up a lot of my time. A lot of the barriers I had to overcome were of my own doing, such as mistakes I made. These mistakes were related to partying, unhealthy relationships and overall just making selfish and hurtful decisions. I was able to overcome them with the help of my support systems and because I became willing to put in the work to do so.

How can your industry make itself more attractive/accessible to Native American artists?

Moya-Smith: Invite more Native American journalists to the editing table. Hire actual Native Americans as reporters and editors and photographers and producers instead of wannabe Indians. Use appropriate language with reference to us.

Ahtone: Journalism has never been an unattractive option for Indigenous people, it’s just inaccessible. Just like it’s inaccessible to the poor, to women, to other people of color, and essentially anyone who isn’t a white male. There’s nothing magical or particularly complex about this: Journalism is an industry for the privileged. There’s a lot of navel-gazing and head-scratching going on post-election in the industry right now, a lot of questioning about how so many of the nation’s reporters failed to see the country for what it is and why it elected Donald Trump. As far as I’m concerned, that massive mistake is a logical consequence for an industry that has failed to be inclusive.

“Journalism is an industry for the privileged.”

Tall Paul: I believe Hip Hop and the music industry are doing well with respect to reaching Native people, but there’s always room for growth. I think more performance opportunities on bigger stages are needed. I also think more funding is necessary and that awareness of such funding opportunities should be raised.

Editor’s Note: The music industry presents a lot challenges for People of Color, two of these challenge – as Paul touches on here – being accessibility and income disparity. With only twenty-five percent of artists making eighty percent of total earnings, minorities tend to make less; black creatives make on average almost $10,000 less than white ones. The industry is rife with comparisons and heavily dependent on who you know. Consequently, musicians face a high unemployment rate of 9% and constantly battle “low chances for success” as an artist1. All this means that more niche artists, or artists of Color such as Native American hip-hop artists, who enter the industry face massive battles in gaining support and visibility.

What do you think are some of the first steps non-Native Americans can take to more accurately and fairly represent Native American communities in journalism, the media, etc.?

“We’re more than the stereotype.”

Ahtone: In the past I’ve said that news organizations need to hire Native reporters – and that’s true – but more importantly, media outlets needs to make  covering Indigenous communities a priority. They need to make a commitment. Make Indigenous Affairs a beat. Media companies cover healthcare, environment, poverty, gender, technology, food, theater, race and ethnicity, and many, many more beats. Indian Country should be no exception. Indigenous stories can be extremely complicated, they require knowledge of completely different state and federal regulations, history, cultural protocols, and more.

“Make Indigenous Affairs a beat…Indian Country should be no exception.”

Reporters can’t just parachute in and expect to do a good job, they need to specialize, but that requires news organizations to make a conscious effort to support that specialization. Around the world both public and private media organizations have already made a commitment to do that. In Australia, for instance, National Indigenous Television provides everything from a nightly news program dedicated solely to Aboriginal and Torres Strait Islanders to Jarjums – Indigenous television for children. The Norwegian Broadcasting Corporation has made it a part of their corporate strategy to strengthen Indigenous Sámi language and culture by creating culturally appropriate programming which is broadcast nationally alongside other content. Similar Indigenous operations exist in Canada, New Zealand, Ireland and Taiwan. Other industrial countries have recognized the importance of Indigenous content and voices, so the question is: why doesn’t the United States? You can hire all the Native reporters you want, but it doesn’t make a lick of difference if you don’t have an environment to support them and foster the knowledge they bring to your organization.

Tall Paul: Ask knowledgeable and experienced people from those communities for their input on whatever the journalists are reporting on. They can give accurate representations of their own communities.

Do you have an example of a story about / from a Native American community that was not shared by mainstream media, but should have been?

Ahtone: There are eight million stories in Indian Country, take your pick. But one example of a story that mainstream should have picked up on earlier was the Dakota Access Pipeline. I think it was pretty clear to every Indigenous person in the U.S. that something big was happening up on Standing Rock weeks before anyone even bothered to send a reporter out. If a single newsroom in the country had people who were tuned into Indian Country, they would have seen this coming. The big question now is whether or not outlets are doing a sufficient amount of work to see what the next big action will be (because there will be more) or if they’ve hit their “Indian News Quota” for the decade after doing a dozen stories from Standing Rock and can now ignore the population again.

Tall Paul: The unusually high cancer rates in the native community of Fort Chipewyan in Alberta, Canada, a community that lies downstream of oil sands.

Moya-Smith: There isn’t one single Native American show host or even a pundit in mainstream media. Not on NBC News. Not at CNN. CBS, ABC, FOX, MTV, HBO … Not one. Begs the question again, why? Food for thought.

Ahtone: There are nearly 400 million Indigenous people around the world and almost zero support for media training in any of those communities save for Sámi University College in Norway which offers a masters degree in Indigenous Journalism. This is a global beat with real and complicated stories that call for outside reporters that have a specific skill set and knowledge base, as well as Indigenous reporters inside those communities who can send stories out. What is most important to me is that Indigenous communities have real, professionally-trained reporters who understand how to navigate the values of the cultures they represent but are also grounded in solid journalism ethics. Fake news is making headlines now, but audiences’ inability to recognize the difference between advocacy and journalism seriously worries me.

There seems to be a new wave of Indigenous writers in the U.S. that think hyper-partisan, stream of consciousness opinion columns pass as actual journalism, or that an I-went-here-and-this-is-how-it-made-me-feel story is real reporting. As journalists, we have to be serious about our craft, responsible with facts, and accountable to our audiences, and that requires not only real training and professionalism, but real commitment to what we do; Something I hope more Indigenous outlets in the U.S. will start adopting. Indigenous outlets are our only hope at the moment since mainstream isn’t going to change.